Strong pressure on the area 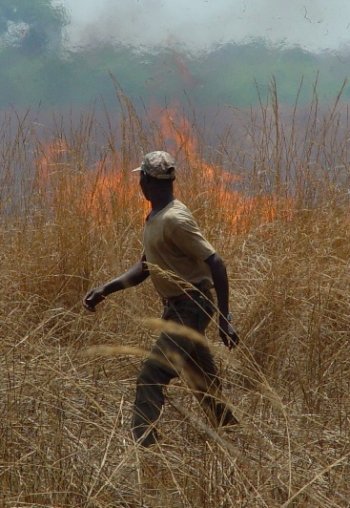 Insecurity
and anarchic use of resources

The insecurity created by the armed conflicts in the area during the last decades has doubled in the North zone, due to an absence of the State services. This failed state situation encourages anarchic use of park resources with severe negative impacts on wildlife and natural habitats.

Artisanal fishing (using methods that degrade the environment and are dangerous for public health), artisanal extraction of diamonds and gold (using methods impacting natural habitats), transhumance, (leading to poisoning of rivers used as holding areas for the processing of livestock), overexploitation of game, are some activities that it is important to control with effective law enforcement. Also an oil exploration license was granted in 2011 to a Chinese company. If the exploration proves conclusive, the impact of the oil extraction will be an additional pressure on the natural environment which will also have to be managed. As part of the Ecofaune Project, a Spatial Development Master Plan (SDMP) is being finalized. Prepared in a participatory manner involving all actors and stakeholders of the Bamingui-Bangoran Prefecture, the SDMP is based on the concept of a systemic approach to the use of spaces. This strategic document, once formally adopted, will guide the rational use of resources in Northern CAR.