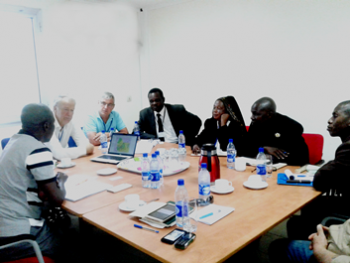 A mission of study and exchange of experiences organized and financed by the ECOFAUNE+ Project and the APN (African Parks Networks), took place in Chad, more particularly in N’Djamena and the Zakouma National Park in December 2017. What are the lessons learned?

The organization of this mission was suggested by the finding of strong similarity between the ecological physiognomy and the recent history of the experience of Zakouma National Park in Chad and that of the protected area complex of Northeastern CAR.

Similarly to the ZAKOUMA national park, that was able to rebuild its once rich ecosystems very quickly thanks to the unshakable will of the Chadian Government and the consequent investments realized among others by the APN, the North-East of the CAR can also become again a paradise for wildlife, inspired by the experiment on ZAKOUMA.

Two objectives had motivated this mission: (i) a visit to a protected area where intense poaching took place and which managed to stabilize the situation with appropriate political will and investment; ii) identify possible synergies in terms of territorial surveillance, and intelligence between the Aouk program, managed by APN (which should start its activities in the coming months) and Ecofaune + managed by AGRECO.

The mission allowed the two deputies of Ndélé, as well as the Director of Wildlife and Protected Areas and the Director of the Bamingui Bangoran National Park, to confront their Chadian interlocutors and find that, as the case of Zakouma shows, it is still possible to restore the ecosystems of Bamingui Bangoran and Manovo. They saw how also for CAR it is still possible to reverse the path of destruction engendered by the civil war of recent years and the lack of state control over transhumance, poaching and the exploitation of resources.

In conclusion, a very informative experience for all. The lessons learned during this study trip, particularly with regard to the issue of transboundary transhumance management, have also been taken up by the Bamingui-Bangoran SDAT (Spatial Planning Master Plan), prepared by the Ecofaune+ project.