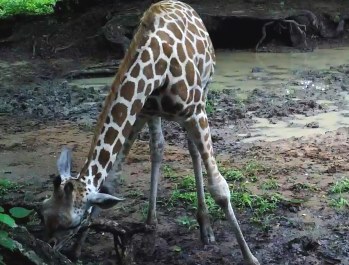 Bamingui Bangoran National Park is home to what is now considered the last RCA giraffe population. Since 2017 Ecofaune + is monitoring their numbers and movements to preserve the individuals of this species in the park.

The giraffes (Giraffa camelopardalis antiquorum) of Northern RCA are the «kordofan», a subspecies that has become very rare. Once abundant in the park, their numbers declined sharply during the 1980s: in 1985 there were about 1750 individuals; in 2005 their population was estimated at 535 individuals, falling to only 162 in 2010. During the recent civil war, with no possibility of control on the ground and because of an intense circulation of armed people in Northern RCA, this trend is aggravated. During the 2017 aerial survey conducted by ECOFAUNE + with the support of WCS, only 2 giraffes could be observed. During the March / April 2018 foot survey of 7996 square kilometers, 28 traces of giraffes were recorded, most of them belonging to just one small group. We now know, thanks to the monitoring put in place by ECOFAUNE+ during the last 12 months, that there remains in the park a population of 7 to 8 individuals including a group of 4-5 giraffes which occupies the south-east part of the park and the ZCV Bamingui-Bangoran and a couple observed in the southern sector moving regularly in the ZCV Koukourou; and finally, a young female, a bit more than a year old, named Kristel by the Bamingui Bangoran rangers, found in an area 30 kilometers north of park headquarters. The movements of these groups are regularly monitored by the rangers that constantly patrol the territory. An advanced monitoring station has been set up in the Kristel area to ensure its safety. It is still possible that other giraffes exist in the park or in the area of Manovo, but currently, it is estimated that the total population of giraffes at Bamingui Bangoran (and indeed throughout CAR) would not exceed ten individuals. With such a limited number, the only hope that the species will survive in CAR is based on intensified and strategic protection. In the meantime, the ECOFAUNE+ project has explored, with an expert from the «Giraffe Conservation Foundation», the possibility of placing satellite units on one or more individuals to better track and protect them. Putting a satellite transmitter requires the capture of the animal, which involves a risk, although little, because of the need to anesthetize the animal to set up the equipment. The reduced visibility, both on the ground and from a plane due to the high dense vegetation at the end of the rainy season, makes it necessary to wait until the dry season to carry out this operation. With such a limited number of giraffes in Northern RCA, it will be important to assess the feasibility of the intervention, including weighing risks and benefits, before any actions is done. In the meantime, Kristel will have grown up, and with the safety of the area resulting from the work of the rangers it is hoped that other individuals will come to seek refuge there.