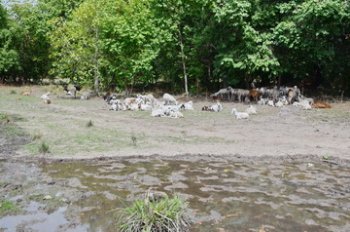 31 May 2018
Rehabilitation of the transhumance corridor

Evaluation of the Bamingui-Koukourou route as part of a feasibility study for the rehabilitation of a transhumance corridor in the Bamingui-Bangoran Prefecture in Northern CAR.

ECOFAUNE + explores the possibilities for the rehabilitation of the transhumance corridor in the Prefecture of Bamingui-Bangoran in order to mitigate the conflicts between transhumance herders, the populations and the wildlife of this region. On May 26, a project team visited the area between the villages of Bamingui and Yombo-Bac to consult local people and to locate potential water points for the cattle herds. The team was impressed by the people’s statements about the aggravating conflicts between them and the herders. The villagers interviewed talked about the destruction of fields and the theft of food products. There have even been reports of rape of women, burning of houses, murdering villagers and of course poaching on the local wildlife. It is clear that measures for the management of these conflicts are urgent.

However, most of the populations consulted expressed their hope to regain the order provided by the transhumance corridors created by the PDRN project during the 1990s. The current relations, disturbed by agro-pastoral conflicts, will require a well-thought-out approach with an important attention to improving the understanding between resident peoples and the pastoralists.