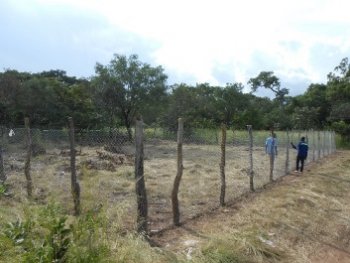 During the month of September 2018 the construction of the enclosure for experimental breeding of Guinea fowl in Bamingui was completed.

The Bamingui Bangoran community’s need for protein, where much of the food intake is made up of wild meat, and the economic opportunity presented by poultry farming, have pushed the population of this region to propose, among the microprojects that can be supported by ECOFAUNE+, an experimental breeding of guinea fowl. In Bamingui, the Group entitled «Standing Woman» («The idea is isolated but its realization is done together» is their motto), is engaged in the development of a guinea fowl breeding programme. The guinea fowl (Numida meleagris), a species native to sub-Saharan Africa, is well adapted to the African climate and is able, unlike exotic chickens, to withstand harsh breeding conditions. The aim is therefore to make this species an important component of the farmyard in the Bamingui Bangoran Prefecture, similarly to the Ouham / Ouham Pendé one, where the guinea fowl is regularly raised and consumed. At the end of September (with a lot of difficulties!) The first animals arrived in Bamingui by road from the region of Paoua. Once stock will be complete and the animal reproduction ongoing, guinea fowls will diversify the income of "Standing Woman" through the sale of eggs, male guinea fowl and guinea fowl chicks. In their opinion, Bamingui guinea fowl breeding it is a promising example of poultry farming in rural areas and they are ready to promote it in Bamingui Bangoran Prefecture, particularly in Vassako Commune.