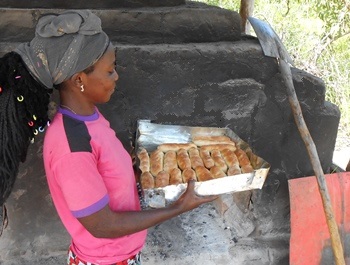 15 September 2018
Opening of the community bakery in Bamingui

The community bakery in Bamingui is operational since August 15, 2018. It is an income-generating activity solicited by the SARA I GA ZO group ("Let’s move forward together to be independent"), which contributes to a dynamic of self-development expressed by local women.

«Sara i ga zo» is an entity made up of a dozen women from the villages of Bamingui and Niango, many of whom have made farming their main source of income. Thanks to ECOFAUNE + COMPONENT NORTH, «Sara i ga zo», was technically assisted to build the bread oven, to learn about the traditional bread making technique as well as about the accounting and financial management of the bakery. Since it began operation, the women of the bakery produce three weekly batches, 220 loaves per batch, fully sold, including in neighboring villages. Given the success of the initiative, an increase in production is already envisaged. «We produce accessible bread to everyone, without excluding low-income households», say the women in the group. At the same time, this activity will enable the dozen households involved in bread production to increase their monthly income and improve their living conditions. The entire local population will also benefit from the supply of bread and the socio-economic dynamism of which the bakery is at the origin.