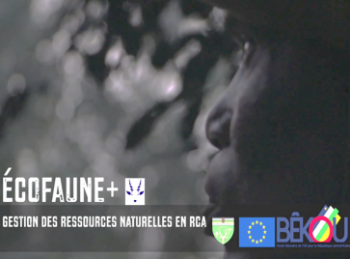 This documentary reflects the testimonies, opinions and expectations of the various local and central actors regarding the evolving state of ecosystems and biodiversity of north-eastern CAR, at the same time providing information on the status of progress of the activities carried out by the ECOFAUNE+ project and on the intermediate results achieved.

The north-east of the Central African Republic is portrayed in this documentary as a wildlife paradise until the late 80’s. Endowed with a paradisiacal landscape composed of magnificent savannas, forests, gallery forests and floodplains, this part of the country was home to up to 34,000 elephants and 2,000 giraffes in 1977. The repeated conflicts and the resulting dissemination of weapons are presented as the incubating factors of the large poaching and facilitators of the transboundary transhumance disorder that have exterminated this rich fauna.

This introductory overview is followed by interviews and information around certain activities and measures envisaged and implemented by the project to mitigate these threats and other identified problems. These communications relate to:

1. The process under development of the Master Plan of the project area. In this section, it is highlighted the need for collaboration on issues such as livestock transhumance with African Parks Networks that intervenes in protected areas on the Chadian side (Zakouma national park and the hunting area of Zakouma) and the Chinko site in the South-East of Central African Republic. The participatory nature of the development process of the said Spatial Planning Direction is also highlighted. The studies and surveys carried out (cartography, anthropology, mapping of mineral resources, entomology, ichthyology, hydrology), which made it possible to determine the values ​​and the pressures on ecosystems, are also presented. This sequence is enriched by the extracts of the interventions of the Rector and the Researchers of the University of Bangui, authors of the studies carried out and by that of Dr. Hilde Vanleeuwe concerning the aerial survey. This sequence also lists the expectations that the master plan is supposed to take into account in particular, the zoning and the micro-zoning of the peripheral territories of the protected areas.

2. Qualifying training of young people, with an overview on the objective of the training which aims to provide opportunities for self-employment to young people in order to make future pioneers of development of Bamingui-Bangoran. The other advantageous side of this qualifying training is that it allows diverting these young people from illegal activities, like poaching. It is followed by excerpts from the closing ceremony of the last training session for 50 young people, which resulted in the delivery of the kits corresponding to the socio-professional sector of each.

3. The village hunting zones, which are intended to be a model for the decentralized management of wildlife resources through a partnership between local communities and operators of sport hunting and vision tourism. This sequence underlines the benefits in terms of tax revenues and induced goods generated by this model.

4. The inter-community fund for eco-development (FICED) is also presented. This fund, as it is presented, aims to facilitate the access of local populations to microloans. It is dedicated to financing micro-projects intended on the one hand, to improve the welfare of the promoters and their families and on the other hand, to help reduce the pressure on biodiversity and ecosystems.

5. Bio-monitoring with a focus on the far-reaching results of the aerial wildlife survey carried out in the project area (North-East of CAR) in Mar-Apr 2018, comparing it with the results of inventories carried out since 1977. The use of camera traps and the use of a foot surveys are also mentioned to supplement the information resulting from this aerial survey. The interest of the data of this survey in the planning of anti-poaching operations and in informing the Bamingui-Bangoran prefecture master plan, is also highlighted. The objective of creating a core conservation area to secure the remaining wildlife and attracting that which can come from elsewhere, is also mentioned.

6. Anti-poaching, with a focus on the recruitment process and the training of rangers on anti-poaching as well as on monitoring operations in protected areas and the village hunting zones (HZCs) is presented. This sequence is enriched by the arguments and testimonies of the Park Director and the leaders of anti-poaching patrols. Communications on measures to correct identified threats and problems are punctuated with comments, concerns and expectations from the diversity of interviewees. Each contribution of the project is related to the opinions expressed by the interviewees and vice versa. Hereinafter some of these opinions:

The unemployment of young people with as a corollary their shift into illegal activities, including poaching, to ensure their survival, poses a threat to wildlife.

The discontinuity of protected area monitoring due to sometimes long interruption periods between two phases of a program or between two successive projects, is detrimental to the achievements of the conservation objectives.

When you prohibit people to poach, it is better to offer alternatives.

ECOFAUNE + will, through sensitization and other actions that it deems useful, encourage the emergence of a behavioral shift toward the conservation and restoration of wildlife in the Northeast.

By protecting wildlife, ECOFAUNE+ contributes to the protection of the local people, by contributing to restoration of the rule of law of the Central African state.

The contributions of ECOFAUNE + is not limited solely to the conservation of the ecosystems and biodiversity of North East CAR. The planes he has rented for his needs have always been used both to transport pharmaceuticals to Ndélé and to carry out emergency evacuations on Bangui.

As a local administrative authority, ECOFAUNE+ has been involved in several awareness-raising campaigns together with local traditional and governmental authorities.

The presence of ECOFAUNE + has the merit of projecting to the outside, a positive image of the Bamingui-Bangoran prefecture. This has already enabled the prefecture to benefit from school, sanitary, administrative and road infrastructure restoration projects.

This documentary was presented for the first time to an audience of about sixty people invited to the Fourth Meeting of the ECOFAUNE +Inter-ministerial Steering Committee held on May 30, 2018 at the “Alliance Française” in Bangui.