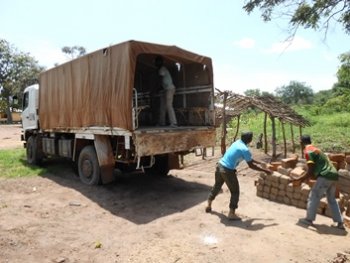 A collaboration between Ecofaune+ and the MINUSCA PakBat based in Bamingui, made it possible the construction of the storare room and hangar that will complete the small complex of the Bamingui community bakery.

On 16 September 2018, MINUSCA provided the Ecofaune+ project with a truck for the transport of 1200 bricks from the village of Bamingui to the base of Bamingui Bangoran National Park, where a warehouse and a littel hangar are being built to complete the community bakery inaugurated last August. The big 4x4 truck of the Pakistan contingent was indeed the only means of transport allowing to move more than three tons of bricks, and to cross the river Bamingui overflowing of its bed because of the heavy rains of the last weeks. Throughout the morning, the UN soldiers, along with the Ecofaune staff, helped by the village youth, participated enthusiastically in this initiative of community interest. And this beacause, of course, everyone is very happy to be able to finally buy fresh bread in Bamingui!